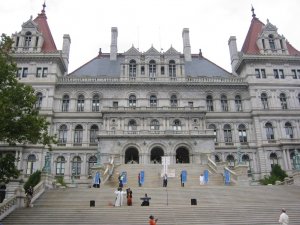 Youth and Government is a nationwide mock state government program for students who have an interest in government. Students in Legislative Branch will write bills, which are proposed laws, the Judicial Branch decides how the laws will write a brief and argue an appellate case and the Executive Branch, led by a student elected Governor, will decide whether to sign a bill into law. You could be a part of the Legislative Branch or the Judicial Branch. If those don’t sound interesting, you could be a part of the press which writes articles about the program for the state conference or a lobbyist which persuades the legislators to change their vote. In March, students from all around the state will meet in Albany for a three day state conference. In Albany, the students will go to the actual capital and debate in the same chambers the state government does. This gives the students a bird’s eye view of what the state government does. The first meeting is on October 4th Youth and Government meets every Thursday at the Cortland YMCA at 7:00 pm. If you are interested come to a meeting and see what it’s all about!

Grace G., Rachel C., and Erica S. bill was ranked first on the docket of their assembly of over 40 bills.

Out of the 640 at the conference from around the state 20 are chosen to attend the Conference on National Affairs with 20 alternates. Matt W. and Mara N. were selected as alternates.

Selected to attend the Conference were Grace G., Andrew J., and Jordon L..

There are 15 teens that are Presiding Officers that run the State Conference. For the 2015- 2016, two are from Homer. Kennedy G.won her election for Public Defender and Andrew J. was chosen to be the Governor of the State of New York. Youth and Government advisor, Ms. Giordano said that in the 19 years she has volunteered for this program Homer has never had a governor. She is extremely proud (we all are extremely proud) of Andrew’s hard work.

Homer students once again represented Central New York at the 2014 New York State Youth and Government conference in Albany! These students joined 600 other teens from across the state to experience the branches and programs of our government. Homer students served as attorneys and justices in the judicial branch and as bill sponsors, cabinet members, and committee chairs in the legislative branch. The following students held leadership positions at the conference:

After a long weekend of hard work, fun memories, and not much sleep, many Homer students were recognized for their achievements. In addition to several nominated students, these delegates received “best” awards, which reward delegates’ achievements through a peer voting process.

Finally, twenty-one students are chosen each year to represent New York State at the national Youth and Government week, the Conference on National Affairs (CONA). This year, Grace Gugerty, Andrew Jacobi, and Ali Jenkins were chosen to represent Homer High School and New York State at this conference, and Erik Gustafson was chosen as an alternate delegate for the program.

In addition to these students, the entire Cortland YMCA club performed outstandingly at this year’s conference! New and returning members alike shone due to their preparation and passion. All those who attended the conference should be proud of their achievements, regardless of what cases won and which bills were passed and signed. If you see any of the following students in school, be sure to congratulate them on their hard work!