The Cortland YMCA is more than just a gym; it’s a community. And within that community are people, just like you, who are busy changing their life, as well as the lives of the people around them. Every other Monday, the Cortland YMCA will be sharing the story of one of our members, program participants, staff, or donors, giving them the opportunity to tell their Y Story, sharing a glimpse into how the Y has impacted their lives.

This week, meet Angie. She’s a staple of our community, both on the race routes and within the Y facility. This is part one of her story; please follow us on Facebook to see the rest of her story. 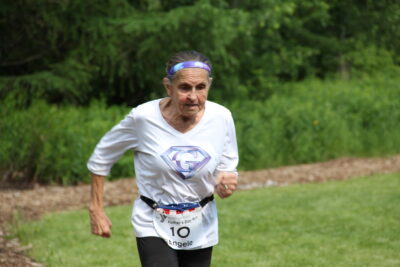 “September the 8th, 1996, I did my first Y run, and it was called ‘Fast Feet’. It was the first run that the Y had ever done, to my knowledge, and my daughter was the one who asked me to run with her. And she was running. So I said, okay, I’ll run with you. I came in last. And I was so embarrassed because my next door neighbor was one of the spotters on the corner of Tompkins St. and Owego St., and when I saw him, I said ‘Okay, you can go home’. I was so embarrassed. And Regina [Angie’s daughter] had finished, and she came back to meet me. That’s how far back I was. So, I thought I’d never do another one again. And she gave me good advice: to stay at a pace. And that’s what I’ve lived by, ever since then. I don’t try to change it, I run it. I got my first ribbon from the YMCA, and I was 59 years old. I was in the age group of 50-59, and I came in second in my age group, believe it or not.

“I became a member on January 1, 2000. My children gave me that as a gift-membership. And that’s how I started. I was still working, I hadn’t retired, so I was only coming here on Wednesdays, and Saturdays maybe. One class, and that’d be it. And then I started doing the races. They used to do just one race a year, and it’d just be Mother’s Day. So we just did the Mother’s Day for a couple years. And then they added the Father’s Day. So, they added all of these different races at different times through all these years. So, that’s how I really got involved in the Y.”

About the Author: Cortland YMCA